A Review of The Chosen by Elizabeth Lowry 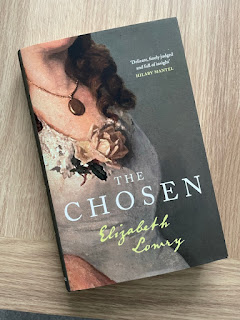 Who pays the price of a writer's fame ?
One Wednesday morning in November 1912, the aging Thomas Hardy, entombed by paper and books and increasingly estranged from his wife Emma, finds her dying in her bedroom. Between his speaking to her and taking her in his arms, she is gone.
In the aftermath of his shattering loss, he comes across a set of diaries that Emma had secretly kept about their life together and he discovers what she had truly felt about their marriage.
By turns tender, surprising, comic and true, The Chosen hauntingly searches the unknowable spaces between husband and wife and regret, life and art.
Hardcover, 304 pages
Published April 14th 2022 by Riverrun - Quercus Books
Immediately, what I love about The Chosen is the cover. The woman on the cover is a portrait of the real first Mrs. Hardy, Emma Lavinia GIfford herself. A stroke of genius for a cover as ever I saw one. 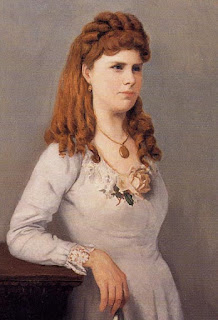 He doesn't remember that time. I am an irrelevance, a clog on his real life. He forgets that I believed in his gift when no one else did, that I saw from the very first what he might be,
I expect nothing from him now & that is just as well - neither gratitude nor attention, love, nor justice. He belongs to the public & all my years of devotion count for nothing.

Reproduced with the kind permission of the Dorset County Museum.

The sad part of the novel, The Chosen, was the life that Emma had towards the end of their marriage. When they spoke to each other Emma was indifferent and hard headed with Thomas; to cope, he poured his love into writing his novels. Emma and Thomas Hardy should have went their separate ways years ago. If it were a different time and place, I'm sure they would have divorced. Then, perhaps Emma would have lived a fulfilling life or at least that is what I would like to think.
Thomas Hardy is writing one of his best loved novels, Tess of the D' Urbervilles while dealing with his wife's death. Widowed and grieving Elizabeth Lowry gives Thomas a vehicle by which to say goodbye; maybe understand her better with the help of a diary/journal which he discovers in her bedroom.  It is the conversation they should have had face to face.
As a reader, it was beautiful to feel the love that Thomas always had for his wife, Emmie. She inspired the women in his novels. Somewhere along the line after years of supporting him and possibly feeling invisible, coming in second, she closed herself off to life, entreating into her own world where she wrote her own novels and poetry.
Thomas Hardy as we see in the novel goes on to have a second marriage with another woman by his side, a colleague who was besotted with him, Florence does indeed become the second Mrs. Hardy. There's was a marriage of mutual respect, friendship, companionship and love of a different ardor.
I really enjoyed reading about a man grieving for his wife with the depth of his soul. it was so refreshing not to have the woman blubbing into a handkerchief.  The Chosen was well researched and beautifully written. Elizabeth Lowry lovingly and respectfully filled in the gaps between Emma and Thomas's broken silences.  I am so glad the author brought Emma Gifford out of the shadows and into the light. I truly enjoyed meeting her and seeing a human side to Thomas Hardy.
The Chosen is available worldwide at online bookstores.
Email Post
Labels: Emma Gifford The Chosen Thomas Hardy