My review of Wakenhyrst by Michelle Paver 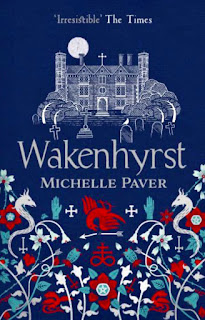 1906: A large manor house, Wake's End, sits on the edge of a bleak Fen, just outside the town of Wakenhyrst. It is the home of Edmund Stearn and his family – a historian, scholar and land-owner, he's an upstanding member of the local community. But all is not well at Wake's End. Edmund dominates his family tyrannically, in particular daughter Maud. When Maud's mother dies in childbirth and she's left alone with her strict, disciplinarian father, Maud's isolation drives her to her father's study, where she happens upon his diary.

During a walk through the local church yard, Edmund spots an eye in the undergrowth. His terror is only briefly abated when he discovers its actually a painting, a 'doom', taken from the church. It's horrifying in its depiction of hell, and Edmund wants nothing more to do with it despite his historical significance. But the doom keeps returning to his mind. The stench of the Fen permeates the house, even with the windows closed. And when he lies awake at night, he hears a scratching sound – like claws on the wooden floor...

Put not your faith in men, she thought. That out there is all you can trust:  that hedge and that wet grass. Those dripping trees.

As if it were happening to someone else, she observed the pieces of her past - Maman, Father, herself - rearranging to make a different pattern.

She saw her childhood peel off and float away like a piece of waterweed in the Lode.

What do you do when a family secret cuts so deep that you bury it inside the deepest recesses of your mind?

Historian, Edmund Stearne, was translating the book of a fifteenth century mystic named Alice Pyett when disturbing events began happening. His behavior became more erratic than usual; especially after a discovery of a lost medieval painting of a demonic devil figure.

It was his very young daughter Maud who shouldered the brunt of her father’s callous and tyrannical behavior. Upon the sudden death of her mother, Maud’s hatred for her father grows setting the scene for a father daughter relationship filled with violence, destruction and all things demonic and obsessive.

There are twists and turns around every corner. I only wish Mauds brothers Richard and Felix were included in the storyline a bit more. Maud prefers talking to her magpie Chatterpie until she meets Fen folk Jubal and Clem.

Michelle Paver takes the characters Edmund, Maud and her brothers full circle which as a reader I rarely see done in novels regardless of any classification. The author doesn’t leave you hanging with curiosity about certain characters as to reasons for their behavior which I am truly grateful for.

Most intriguing were the chapters from the notebooks of Edmund Stearne. The reader gets to see his thought patterns and you feel like he’s talking to you.

Wakenhyrst truly is an exceptional gothic themed novel set during the Edwardian era with a subtext of folklore, superstitions, and religious ideology of medieval fifteenth century England.

To purchase the book on  Amazon