Chaucer at the Court of Edward III by Ford Madox Brown 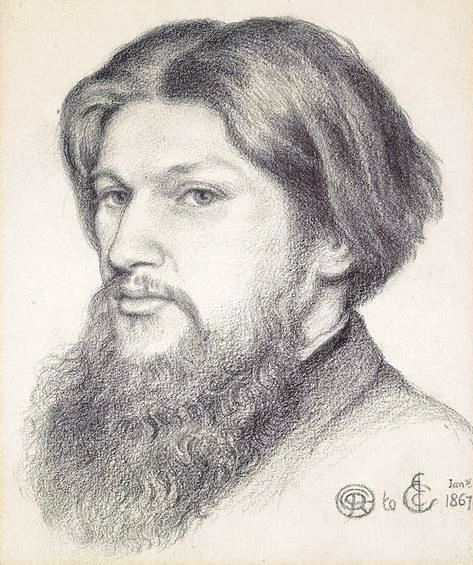 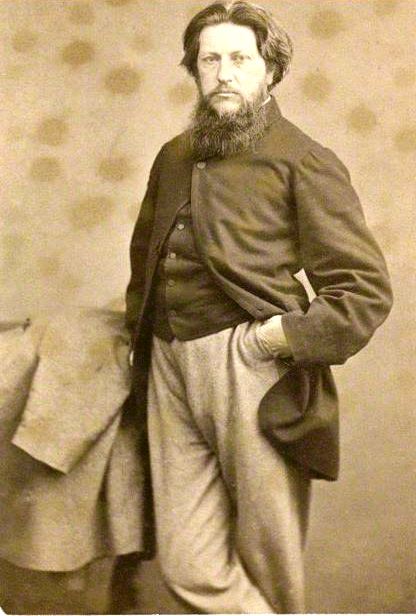 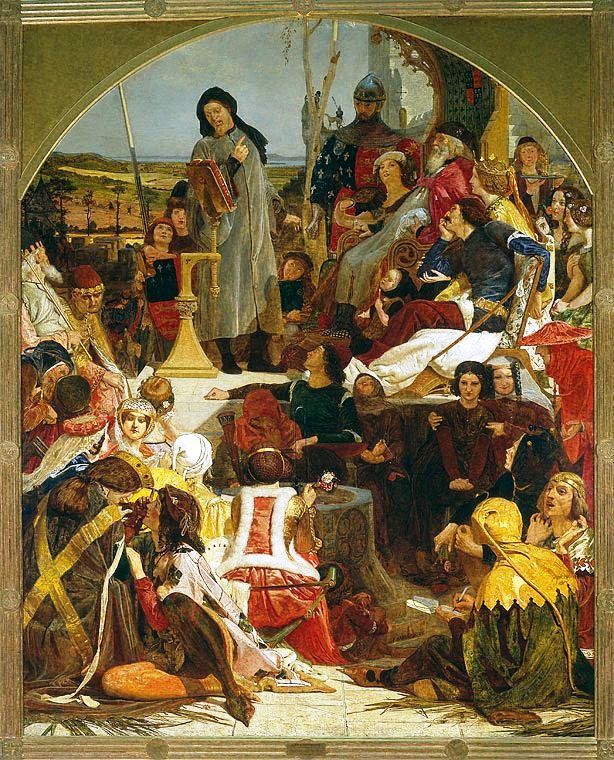 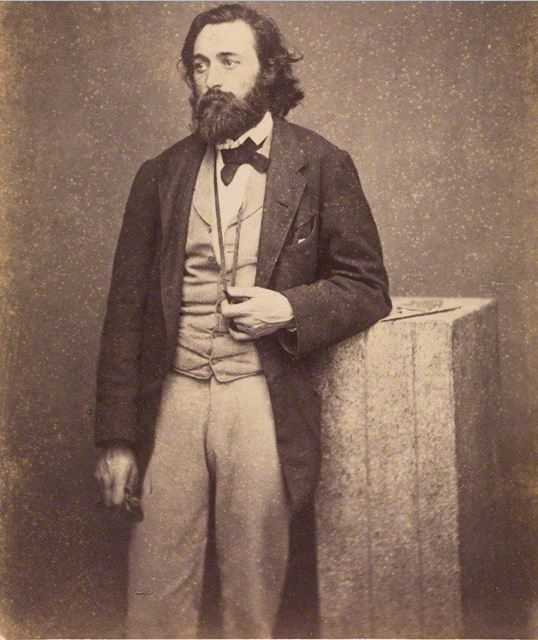 <--- According to Arthur Hughes, 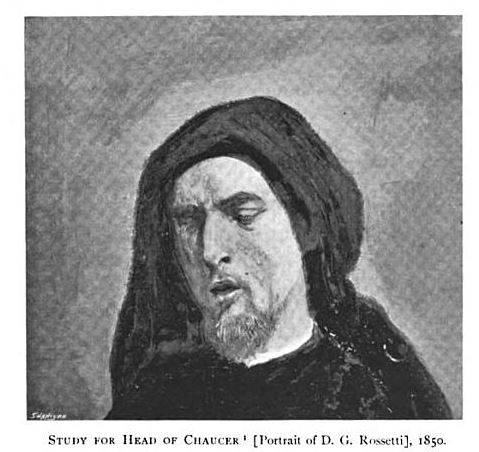 “I shall always remember my first sight of him some forty years ago, in a vast studio he had, behind a house on the right-hand side of Newman Street, a part of which Gabriel Rossetti was using. It was to see Rossetti that I was taken by my friend, Alec Munro, the sculptor, and greatly impressed I was by the mysterious studio all darkened by the great canvas Brown was at work upon of Chaucer at the court of Edward III. (Gabriel Rossetti being the model for Chaucer), and which afterwards seemed to fill almost the whole side of the middle room of the Royal Academy in Trafalgar Square, and which, to complete in time, Brown worked upon continuously the last three days and nights. However, I was not allowed to see its face on this occasion, but, from its depths, Brown emerged with the impressive and rather severe face he seemed habitually to wear in those days, and which gave place to so entirely different a one in later years.” 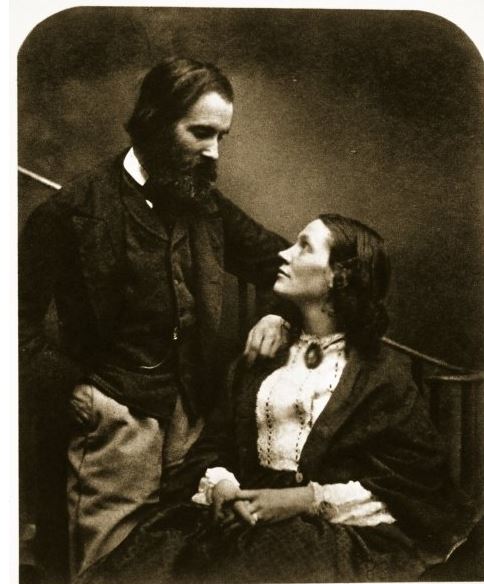 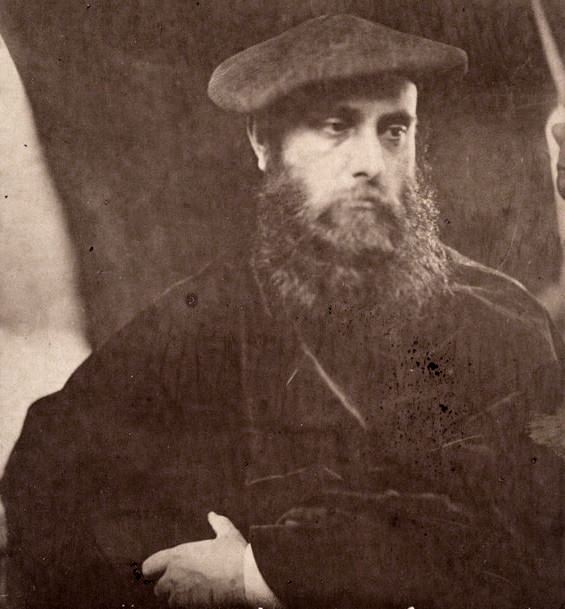 According to Gabriel Rossetti’s brother, William Michael Rossetti, “however strenuous were Madox Brown’s efforts to finish the Chaucer, it was only by working night and day for some days before ‘sending-in day’ that he was able to accomplish his task in time for the R.A. exhibition.  The complication of the subject was great. It is explained by Madox Brown:

Chaucer is supposed to be reading these pathetic lines from the ‘Legend of Constance’:


Pees, litel sone, I wol do thee no harm.


With that hire coverchief of hire hed she braid


And over his litel eyen she it laid,


And in hire arme she lulleth it ful fast,


And unto the heven hire eyen up she cast.


Edward III is now old, Philippa being dead; the Black Prince is supposed to be in his last illness.  John of Gaunt, who was Chaucer’s patron, is represented in full armor, to indicate that active measures now devolve upon him.  Pages holding his shield, &c., wait for him, his horse, likewise, in the yard beneath.  Edward the Black Prince, now in his fortieth year, emaciated b sickness, leans on the lap of his wife Joanna, surnamed the Fair Maid of Kent.  There had been much opposition to their union, but the Prince ultimately had his own way.


To the right of the old king is Alice Perrers, a cause of scandal to the Court, such as, repeating itself at intervals in history with remarkable similarity from David downwards, seems to argue that the untimely death of a hero may not be altogether so deplorable an event.


Seated beneath are various personages suited to the time and place. A troubadour from the South of France, half-jealous, half in awestruck admiration; a cardinal priest on good terms with the ladies, a jester forgetting his part in rapt attention to the poet. This character, I regret to say, is less medaeval than Shakespearian. Two dilettante courtiers (are) learnedly criticizing, the one in the hood is meant for Gower. Lastly, a youthful squire of the kind described by Chaucer as never sleeping at night, ‘more than doth the nightingale,’ so much is he always in love.


Sitting on the ground being common in these days, rushes used to be strewn to prevent the gentlemen from spoiling their fine clothes.


This picture is the first in which I endeavoured to carry out the notion, long before conceived, of treating the light and shade absolutely as it exists at any one moment instead of approximately or in generalized style. Sunlight, not too bright, such as is pleasant to sit in out-of-doors, is here depicted. The figures in the spandrils of the arch symbolize the overthrow through Chaucer of the Saxon bard and the Norman troubadour. (Excerpted from the catalogue of the Piccadilly Exhibition, 1865, Ford Madox Brown’s own words at the time).


It may be interesting to mention that, besides that of Rossetti, the work contained portraits of several of the painter’s circle:  the page was Walter Deverell, the ‘beloved’ young P.R.B.; the troubadour, W.M. Rossetti; and the jester, John Marshall, the surgeon.

Simply the Beauty of the paintings of George Sheridan Knowles (British, 1863–1931)

Painter in oil and watercolor of genre and historical subjects. Born in Manchester on 25th November 1863. Studied at Manchester School of Art, and at the Royal Academy Schools in 1884. Exhibited at the Royal Academy from 1885. Elected R.B.A. in 1889, and R.I. in 1892. Represented in several public collections. Lived in London and died on 15th March 1931.
R.B.A.: Royal Society of British Artists
R.I.: Royal Institute of Painters in Watercolours
Biographical source: Grant M. Waters, 'Dictionary of British Artists Working 1900-1950'. 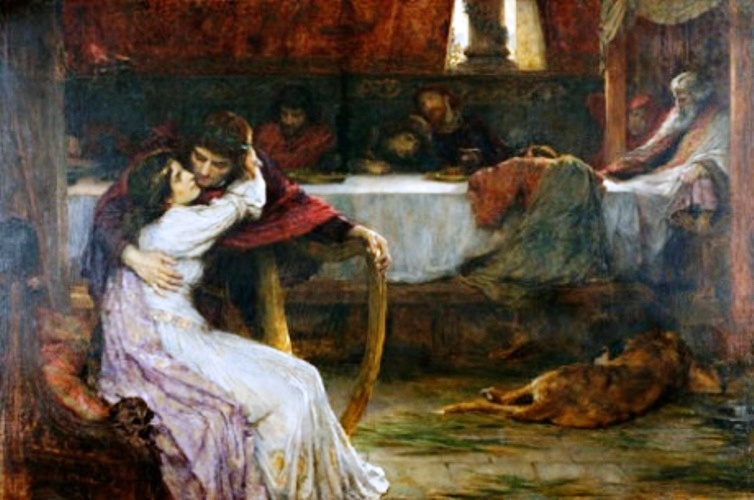 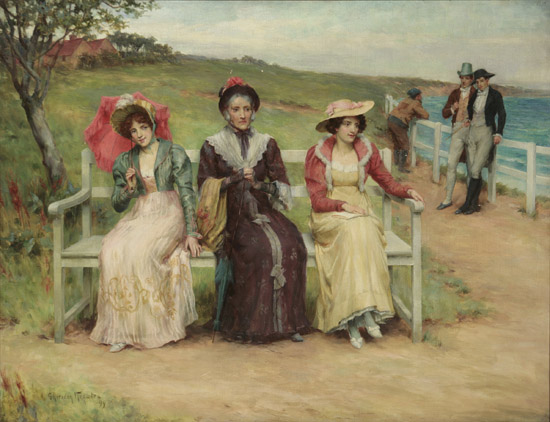 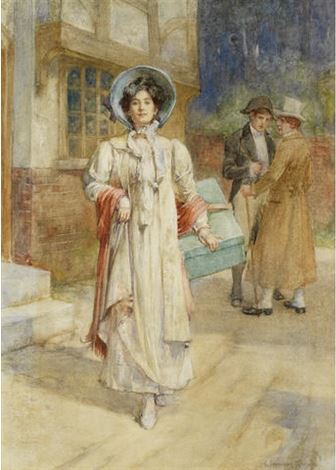 The Belle of the Village by George Sheridan Knowles 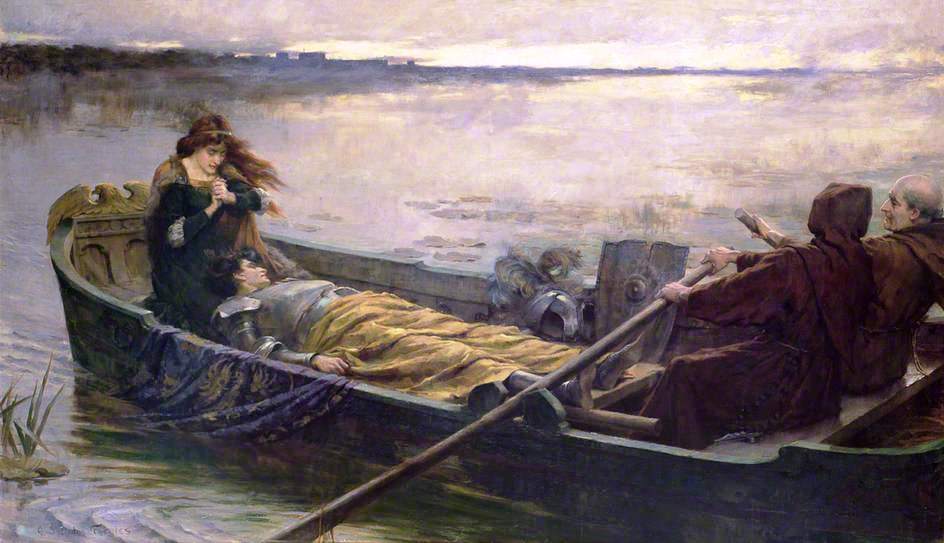 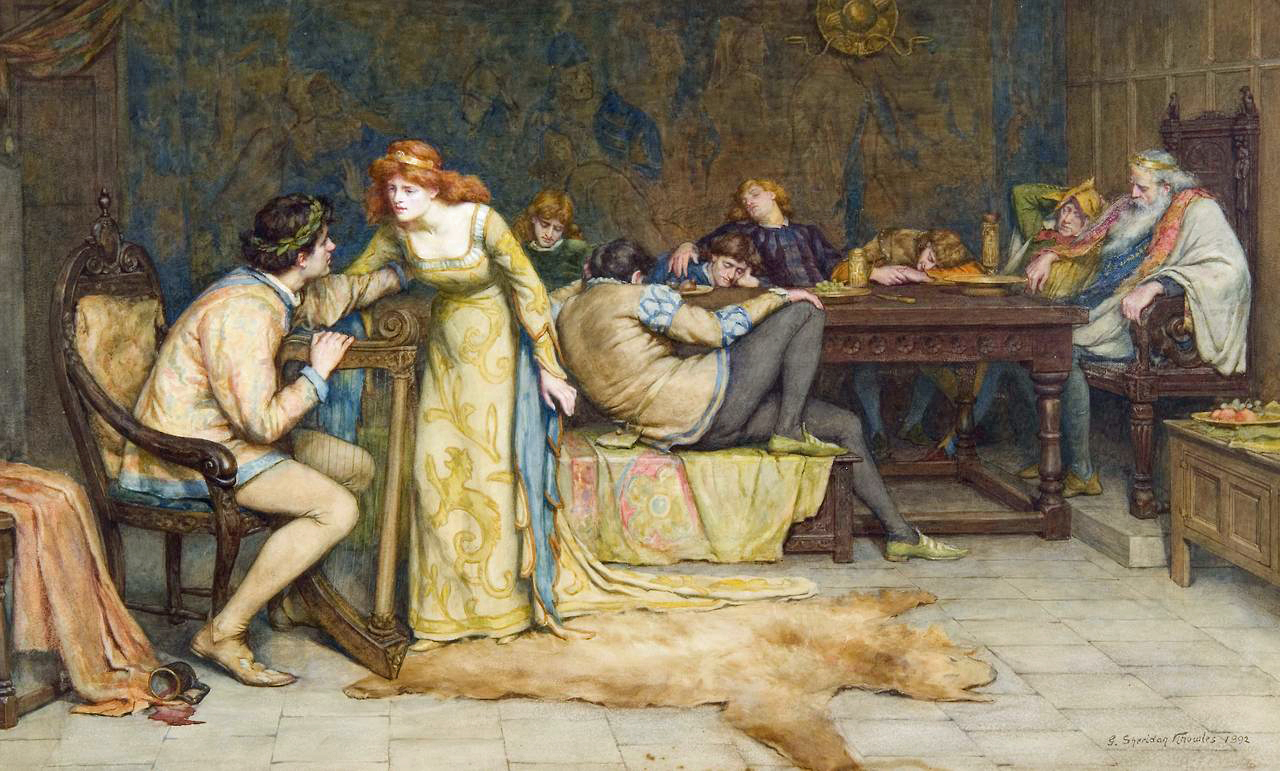 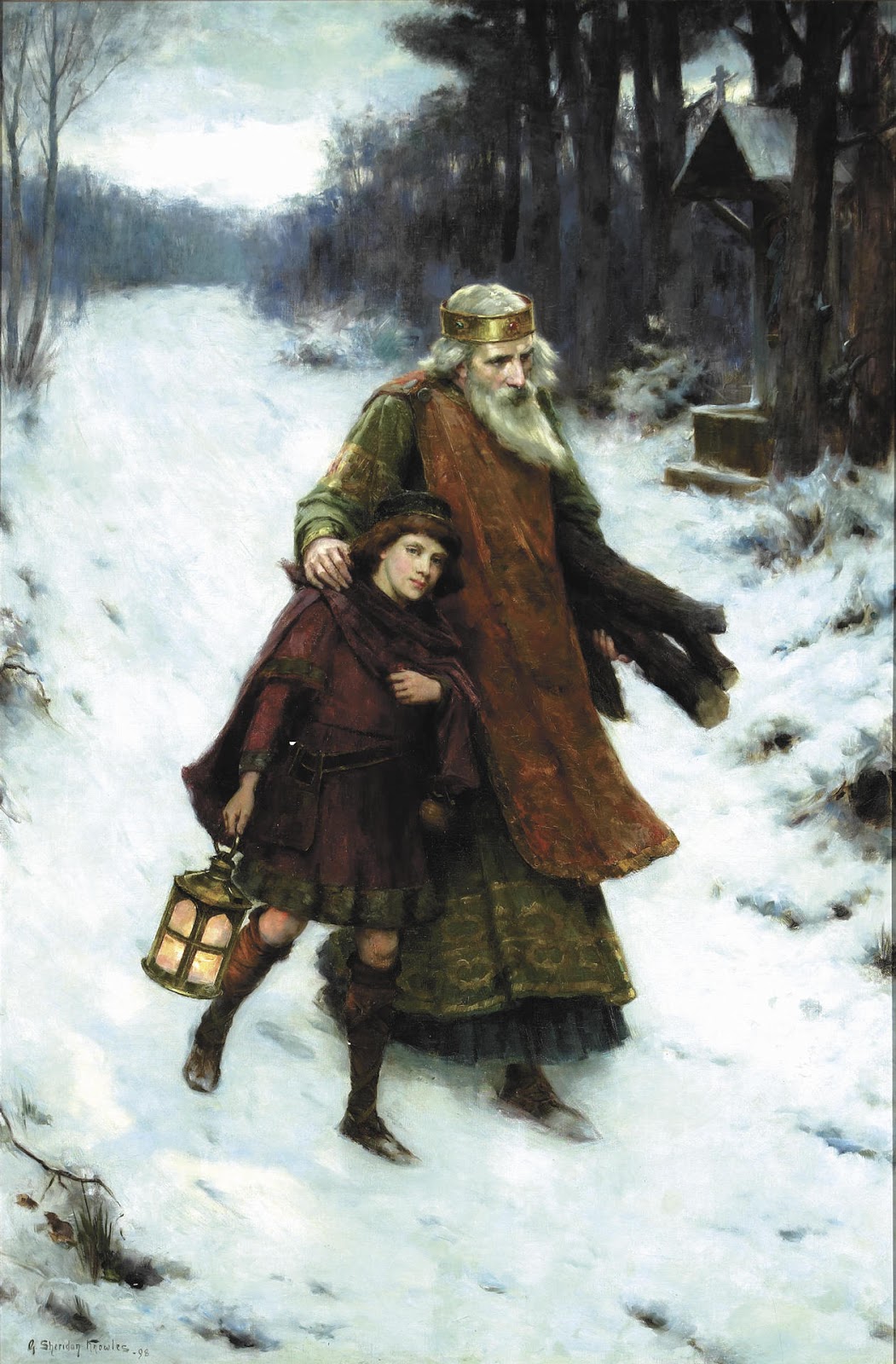 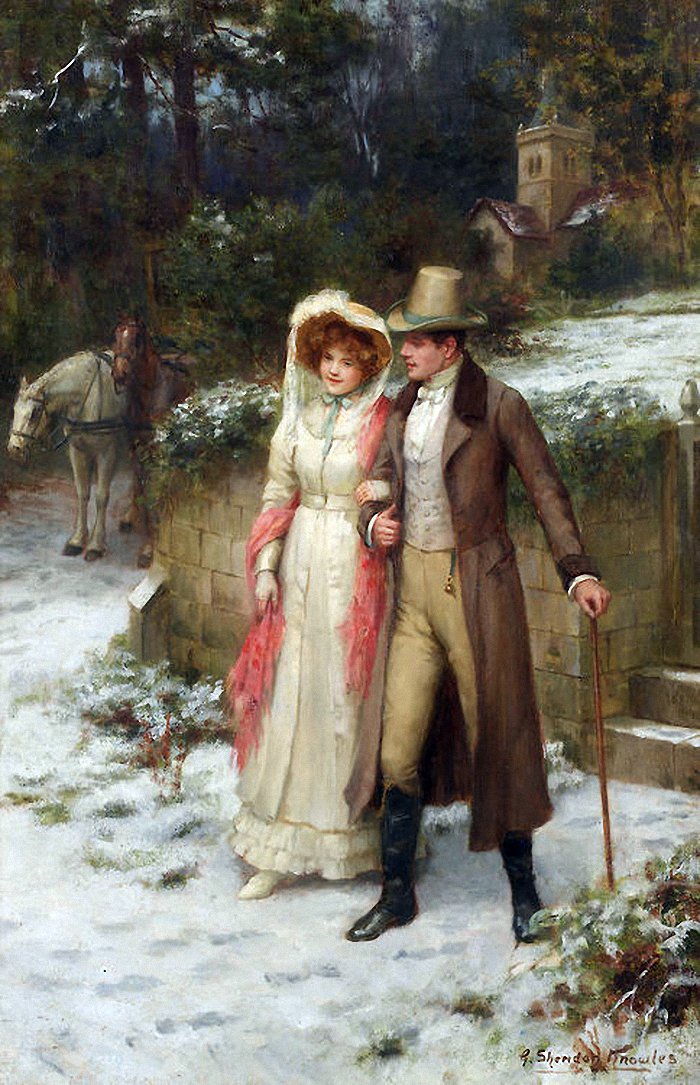 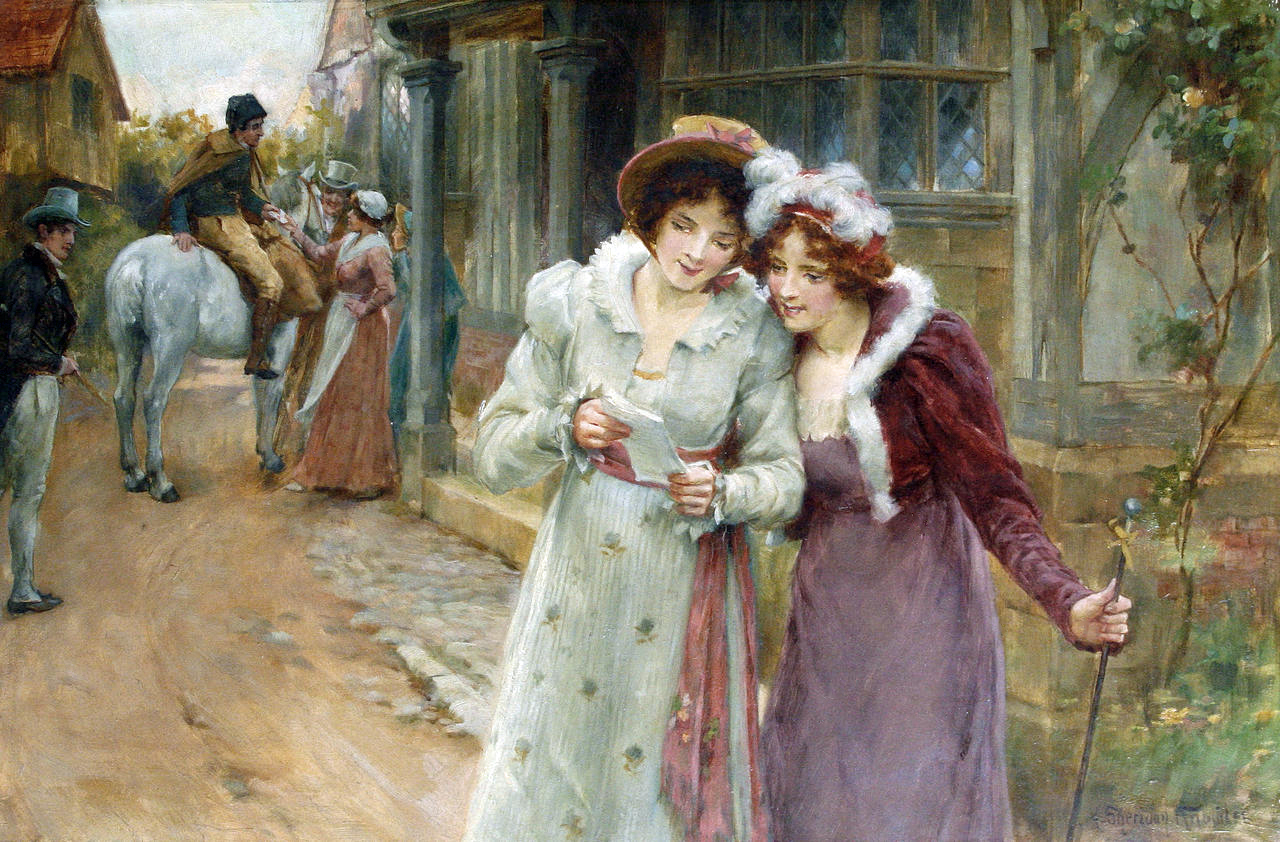 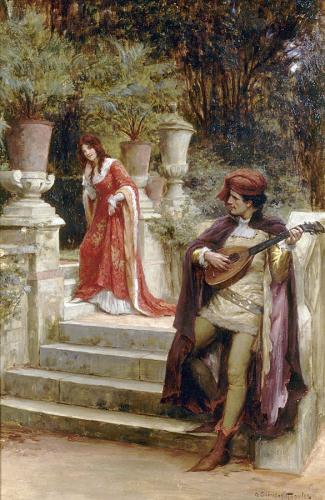 Upcoming Auction: Portrait of May Morris by Dante Gabriel Rossetti 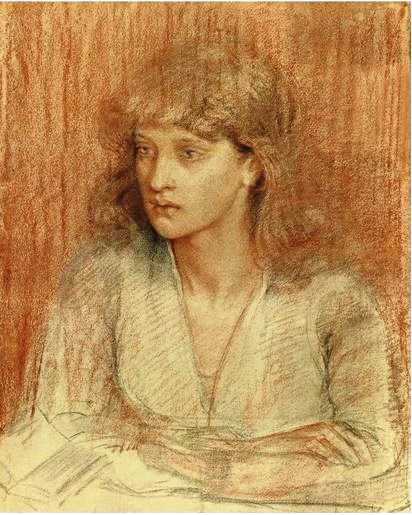 "May Morris was the younger daughter of Rossetti’s closest friend, the designer William Morris and his wife, Jane, a woman with whom Rossetti was passionately in love in his widowhood and who inspired many of his greatest works. Rossetti was very fond of May and her sister Jenny, who helped to fill the void left by the infant death of his only child; in the late 1860s he wrote of Jenny who spent most of her life as an invalid, ‘I ought to have had a little girl older than she is’.  At one point Rossetti even half-seriously considered trying to adopt May in whom he saw a streak of the genius that made her father one of the most remarkably talented men of his age. Rossetti admired the Morris sisters’ independent personalities, describing them to his mother on 17 July 1871, as; ‘dear little thing – perfectly natural and intelligent, and able to amuse themselves all day long without needing to be thought about by their elders’. Rossetti recognized that May in particular had inherited her mother’s looks and was ‘quite a beauty the more one knows her and will be a lovely woman. She is very clever too, I think, and has a real turn for drawing.’

This previously unrecorded and haunting portrait of May was almost certainly made at Kelmscott Manor on the banks of the Thames near Lechlade in Oxfordshire. Preoccupied with work, Morris left his wife and daughters for long periods at the beautiful old manor house, the lease of which he shared with Rossetti from the summer of 1871. After a nervous collapse and suicide attempt in 1872, following a harsh criticism of his poetry, Rossetti began to spend increasing amounts of time at Kelmscott which Morris put at his disposal. It was a refuge for Rossetti to recover and at Kelmscott his relationship with Jane became obvious to many; a contemporary recalled ‘My most representative recollection of him is of his sitting beside Mrs. Morris, who looked as if she had stepped out of one of his pictures, both wrapped in a motionless silence as of a world where souls have no need for words.’ (R.E. Francillon, Mid-Victorian Memories, 1914, p.172). May and Jenny’s company also lifted Rossetti’s spirits and he experienced for the first time what it would have been like to have children of his own. The sensitive portraits that Rossetti made of May demonstrate his affection for her and present a less mannered vision of the Morris beauty than those of her mother.

Despite Rossetti’s fondness for May he made relatively few pictures of her. His principal portraits of her were made in 1871, including a beautiful chalk drawing of her head (Society of Antiquaries of London, Kelmscott Manor) and a half-length pastel portrait of her leaning on a parapet and holding a pansy (private collection). At Kelmscott in the summer of 1873 may posed for the two attendant angels in Rossetti’s masterpiece La Ghirlandata (Guildhall Art Gallery, London) and this appears to be the last time that she posed for Rossetti – although it has tentatively been suggested that she posed for Mary Magdalene in 1877 (Delaware Art Museum, Wilmington). In the present picture Rossetti sketched on open book, perhaps a reference to her father’s literary prowess but also to May’s love of reading.


“In 1938 Sir Sydney Cockerell wrote of May, ‘I first met her, a beautiful girl of 23, in 1885…with many excellent qualities she combined a dissatisfied attitude on life which interfered greatly with her happiness and with that of others…if only she could have married the right man what a different, more effective, and far happier woman she would have been!...She was in love with Bernard Shaw before he became famous and he with her…Stanley Baldwin fell in love with her too, and so did Burne-Jones.’ (Philip Henderson, William Morris, his Life, Work and Friends, 1967.pp.299-300) (Sotheby’s catalogue British & Irish Art 10 December 2014, pp. 22-23).

I was lucky enough to research Jane Morris at The Morgan Library and one of the belongings was Sydney Cockerell's little black book full of his letters,  Sydney Cockerell and The Pre-Raphaelites

To see the beautiful paintings in the upcoming auction,  Sothebys