Showing posts from December, 2011
Show all

Merry Christmas To All...And To All A Good Night! 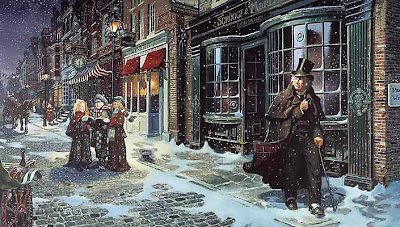 A Scene From A Christmas Carol by Charles Dickens " Again the Ghost sped on, above the black and heaving sea--on, on--until, being far away, as he told Scrooge, from any shore, they lighted on a ship. They stood beside the helmsman at the wheel, the look-out in the bow, the officers who had the watch; dark, ghostly figures in their several stations; but every man among them hummed a Christmas tune, or had a Christmas thought, or spoke below his breath to his companion of some bygone Christmas Day, with homeward hopes belonging to it. And every man on board, waking or sleeping, good or bad, had had a kinder word for another on that day than on any day in the year; and had shared to some extent in its festivities; and had remembered those he cared for at a distance, and had known that they delighted to remember him ." ~ Charles Dickens, A Christmas Carol My memories of Christmas have a lot to do with my grandparents and spending it with them in their apartment in Manhattan
4 comments
Read more 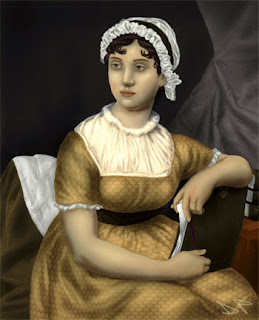 "It is very much what someone settling down to write does, getting up, pacing, thinking, returning to the page she is working on" Jane Austen wrote six novels in her lifetime. She passed away in the year 1817; leaving no diaries that we know of. The Austen Family destroyed her letters. Jane's brother Henry asserts, "my dear sister's life was not a life of events". .. (We shall see Henry, we shall see)... On 16 December 1775 in the Hampshire village of Selborne, Jane Austen was born in the evening at home without the presence of a doctor. A doctor was seldom called for  "something as routine as childbirth" . Her christening would be held at home and viewed as something of a matter of routine. Just one week later, The Austen Family celebrated Christmas with the gift of baby "Jenny" as she was called by her sisters. On Christmas Eve the Austen children laid out the traditional holly branches on the window ledges. On Christmas morning,
3 comments
Read more

A Review Of The Life of Charlotte Bronte By Elizabeth Gaskell 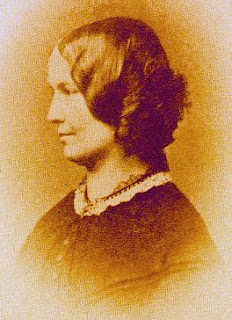 Photo of Charlotte Bronte in 1854 a year before her death “As to the Mrs--, who, you say, is like me. I somehow feel no leaning to her at all. I never do to people who are said to be like me, because I have always a notion that they are only like me in the disagreeable, outside, first-acquaintance part of my character; in those points which are obvious to the ordinary run of people, and which I know are not pleasing. You say she is “clever” – “a clever person.” How I dislike the term! It means rather a shrewd, very ugly, meddling, talking woman …Charlotte Bronte, April 2, 1845 Charlotte Brontë died on March 31, 1855, and when Elizabeth Gaskell learned of her death, she resolved to write a memoir of her friend and fellow-novelist. On May 31, 1855, she wrote to Bronte's publisher, George Smith of Smith, Elder: ''if I live long enough, and no one is living whom such a publication would hurt, I will publish what I know of her, and make the world (if I am but strong eno
4 comments
Read more
More posts