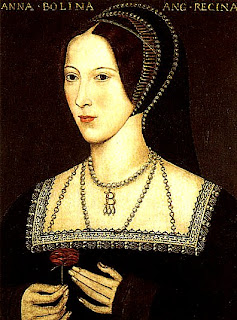 I firmly believe Anne Boleyn stood out to Henry VIII not only for her rumoured beauty but because she was unlike any British born woman he had ever met. This is partly the reason why she is still being talked about to this day.
During her adolescent years, Anne Boleyn was groomed and educated in the Netherlands and France by three very influential women: Archduchess Margaret of Austria, Henry VIII’s sister Margaret Tudor, who was betrothed to French King Louis XII of France, and Queen Claude of France. She served as a maid of honor or junior attendant but not yet a lady-in-waiting. By the time she returned to England and met Henry VIII she was every bit a French Lady.
She was a walking, talking contradiction of what a Sixteenth Century woman was supposed to be. She was up on the latest politics of the day and had no qualms about taking part in political debates with both sexes no matter their status. She was very well read and often took it upon herself to recommend the religious books of the day to her husband, King Henry VIII, when she felt her influence was needed without being viewed as a threat given that they practiced separate religions i.e. Henry was Protestant and Anne was Catholic.
Although, she knew her place, she rarely kept silent. Standing her ground and not backing down on the important issues of the day. Her influence was strongly felt amongst Henry VIII’s Privy Council during their courtship as well as during their short lived marriage which was the beginning of her downfall.
We are still so addicted to this woman who lived over four hundred years ago because she is forever shrouded in mystery. There are so many unanswered questions concerning her life and the turbulent times in which she lived that she has become an enigma; serving as a touchstone for every student freshly discovering her for the very first time whether it be within the pages of a book, a class lecture, a painting hanging in a museum, a movie or a popular Showtime Television Show!
Everyone believes they can figure out the pieces to the puzzle and come up with the answers to the questions that history has left us but the truth is we will never know who she really was, why she truly married Henry VIII, or how much British history would have been altered forever had she been blessed enough to give birth to a son in addition to her only daughter Elizabeth I who became one of the longest reigning queens of England.
No matter what is said about Anne Boleyn she left one of the greatest legacies a woman could leave and that is her daughter Elizabeth.
By Kimberly Eve
Article 2
The Legacy of Elizabeth I 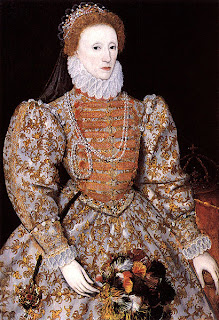 “It would please me best if, at the last, a marble stone shall record that this Queen having lived such and such a time, lived and died a virgin”.

I admire Elizabeth I as a woman who grew up for the most part a motherless child. She was born to a father who became one of the longest reigning Kings of England. Constantly having to prove herself more than able and worthy of being Queen of England; juxtaposed with having to fight the stigma of Anne Boleyn and what it meant to be her daughter. She carried the legacy of the Tudor dynasty on her shoulders during her forty-five year reign (1558-1603) and seventy year old life (1533-1603). What that must have been like one can only speculate.
It seems more than obvious to me that growing up with the knowledge and understanding of a father who marries, divorces, and beheads, six wives including your own mother, does not make one eager for marriage. Even though, Elizabeth I understood the importance of marriage as a queen, she obviously never deemed it important enough to claim a husband hence one of her titles ‘the virgin queen’. You have to admire her forthrightness and courage to stand her ground as a female first and foremost. Ah, she is her mother’s daughter after all!
Throughout her reign, Parliament petitioned her to marry or nominate an heir to prevent civil war upon her death. She refused to do either. She kept this question open using it as a diplomatic ploy. Instead saying in 1563, “If I follow the inclination of my nature, it is this beggar-woman and single, far rather than queen and married".
As a result, Parliament viewed her failure to marry as irresponsibility on her part. However, Elizabeth's silence strengthened her own political security. She understood that if she named an heir, her throne would then be vulnerable to a coup.
The romantic in me believes that the love of her life will always be childhood friend Robert Dudley. They became good friends when Elizabeth was just a princess during the year 1557-1558. She was so fond of him she gave him his first title, ‘Master of the Horse’ or ‘Horsemen’. In 1558, upon the passing of her half-sister Mary Tudor, she became Queen of England. A year later, in April 1559, one of her first royal duties was to give Robert Dudley the second title of ‘Knight of the Garter’ or ‘knightood’. This was a way to keep the now Lord Robert Dudley near her even though he was a not so happily married man. They could be together romantically but still maintain the charade of friendship. Their intimacy soon was talk in court, country and abroad. Even though she promised to marry him, during two of his marriages’, she never did; fearing a political uprising. Robert Dudley forever kept a special place in her heart. After Elizabeth's death, a note from him was found amongst her most personal belongings, marked "his last letter" in her own handwriting. Robert Dudley died in 1588 shortly after the Spanish Armada.
The Elizabethan Era is associated with Queen Elizabeth I’s reign (1558–1603) and is often considered to be the golden age in English history. It was the height of the English Renaissance which saw the abundance of English poetry, theatre, music and literature. For example, The Faerie Queene by poet Edmund Spenser was written in praise of Queen Elizabeth I. She appears most prominently as Gloriana or the Faerie Queene herself. Largely symbolic, the poem follows several knights in an examination of several virtues. It hints at a connection between the Tudor dynasty and King Arthur.
Elizabeth I was the first Tudor to recognize that a monarch ruled by popular consent. She worked with Parliament and advisers she could trust to tell her the truth in a way that her Stuart successors failed to follow. Some historians have called her lucky in that she believed that God was protecting her. Referring to herself as being "mere English", she trusted in God, honest advice, and the love of her subjects for the success of her rule. In a prayer, she offered thanks to God saying, “when wars and seditions with grievous persecutions have vexed almost all kings and countries round about me, my reign hath been peacable, and my realm a receptacle to thy afflicted Church. The love of my people hath appeared firm, and the devices of my enemies frustrate”.
Above all, Elizabeth I loved her mother whom she lost so tragically at the age of two and a half. She always wore a bejewelled locket ring on the finger of her left hand. When she died, her men removed and inspected her jewels. When the locket ring was opened, two miniature portraits were painted on either side: one of her mother Anne Boleyn and one of herself.

By Kimberly Eve
Article 3
Fall From Grace
and as for myne offences, I here accuse no man,  God knoweth them;
I remitt them to God, beseeching him to have mercye on my sowle
t is very hard for me to place blame with Anne Boleyn for I admire her greatly as a woman of strength, confidence, who with great courage chose to live her life on her own terms.  She spoke her mind even when she knew it could bring about her own downfall or fall from grace.  I do believe that between the months of January through the 19th of May, 1536, Anne Boleyn, Queen of England, brought upon her own ‘fall from grace’. However, she had no idea to what extent her own husband and his right hand man, Vicar-General in Church matters Thomas Cromwell would swiftly bring about her downfall. Ironically, Thomas Cromwell was a supporter of Anne Boleyn’s until they disagreed over the direction of foreign policy and the best use for proceeds from the dissolution of the monasteries.
Two factors would bring about Anne Boleyn’s fall from grace prompting Henry VIII to fall out of love with his wife and be open to the conspiring suggestions of Thomas Cromwell.
Towards the end of January, 1536, Anne Boleyn miscarried a three and half month old fetus. Upon hearing the news Henry complained, ‘I see that God will not give me male children’(Doran, 178). This statement signalled the beginning of the end of the royal marriage. Henry fearing he would never have a male son moved his new mistress, Jane Seymour, into the royal apartments.
The final stroke of the sword came when Anne decided to get involved with the dissolution of the monastaries. Thomas Cromwell paid ecclesiastical visits in order to calculate the taxable wealth of the Church to which the King was now Supreme Head. As a result, Thomas Cromwell insisted on filling the King's depleted coffers, while taking a cut for himself instead of an imperial alliance. Anne differed with Cromwell over the redistribution of Church revenues and foreign policy. She advocated that revenues be distributed to charitable and educational institutions; and she favoured a French alliance.
Unfortunately for Anne Boleyn she lived in a time when the role of a woman was mainly as a wife and mother. Women were subservient and viewed as property by which they had no rights. Even as Queen of England this was the expectation of Henry VIII, King of England.  When Anne Boleyn could not deliver on her promises or when she demonstrated a brain and viewpoints that differed to the powerful men of the sixteenth century she was disposed of. However, Anne Boleyn lives on as a dynamic woman ahead of her time who left an outstanding legacy in her daughter, Elizabeth I, Queen of England (1558-1603).
CITED IN:
Henry VIII:  Man and Monarch. Author, Exhibition guest curated by David Starkey, Catalogue edited by Susan Doran.  Publisher:  The British Library, London, April-September 2009.
By Kimberly Eve
- November 26, 2010 4 comments: