Showing posts from January, 2021
Show all

The Dead City by Christina Rossetti: Living in a time of pandemic? 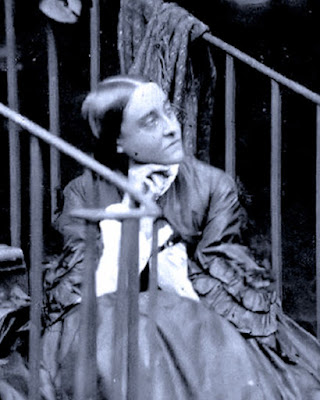 Christina Rossetti by Lewis Carroll, October 7, 1863, NPG The genius of the family. She was the Dante of our family.  Christina, was the daughter of what was noblest in our father  and beautiful in our mother.  Dante Gabriel Rossetti speaks of his sister. In 1847 poetess, Christina Rossetti believed to be inspired by the story of Zobeide in The Arabian Nights , wrote, The Dead City ; a first person singular allegory where a woman narrates her walk through an abandoned city as she makes her way to a dinner already laid out on a table. The poet warns the reader of the dangers of 'urban materialism' in a consumer culture gone awry almost pleading for the need for spiritual awakening.   As we live in the beginning of 2021, one hundred and seventy four years after The Dead City was written, I can see parallels to the detriment of urban living. Thus, resulting in the concrete, grey, desolation of city sidewalks deserted of humans where a light shines upon tents leading the way to a
Post a Comment
Read more

Professional photographer Matthew Cunningham returns home from a successful assignment in Paris and upon realising the loss of his camera case, he panics, not only does it contain expensive photographic equipment, but also hundreds of stored images. Several days later, his girlfriend Libby Ellis receives an anonymous package containing both photographs of the models Matt works with and also herself. After a meeting, Libby fails to return home and Detective Sergeant Isobel Woods begins investigating her disappearance. Struggling with internal politics and a boss intent on discrediting her, she is told to solve the case as quickly as possible. However, events take an unexpected turn. Gradually women connected to Matt are drawn into the nightmare and DS Woods suspects his involvement. Co-operating with the police while secretly negotiating with the abductor, Matt risks incriminating himself and is left with no option but to gamble with the lives of those closest to him. Paperback, 341 pag
Post a Comment
Read more
More posts