For the first time, a joint biography of William Morris and his creative partner and wife, Jane Morris.

William Morris – poet, designer, campaigner, hero of the Arts & Crafts movement – was a giant of the Victorian age. His beautiful creations and provocative philosophies are still with us today: but his wife Jane is too often relegated to a footnote, an artist’s model given no history or personality of her own.

In truth, Jane and William's personal and creative partnership was the central collaboration of both their lives. The homes they made together – at Red House, Kelmscott Manor and in London – were gathering places for artists, writers and radical thinkers. Through their domestic life and the things they collected and made, Jane and William explored how we all might live a life more focused on beauty and fulfillment. As William said, ‘The secret of true happiness lies in taking a genuine interest in all the details of daily life’.

In How We Might Live, Suzanne Fagence Cooper explores the lives and legacies of Jane and William Morris, finally giving Jane's work the attention it deserves and taking us inside two  worlds of unparalleled creative artistry. 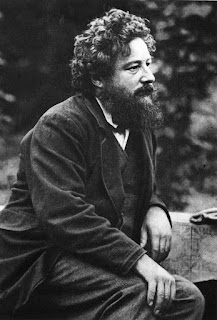 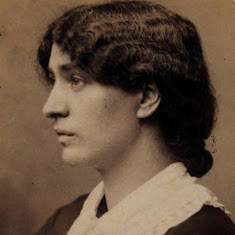 William and Jane's marriage was tested by infidelity, and the chronic illness of their daughter Jenny. There were times of sadness and dislocation.  Still, these sufferings were resolved kindly.  In their London home, poets and political firebrands often sat side by side at supper.  We can hear the fierce discussions, the explosive tempers.  And yet, under Jane's roof, there was always space for careful, quiet designing, for embroidery and calligraphy.

William himself was constantly trying out new ideas, writing, drawing, weaving, talking.  Sometimes it was hard for Jane to keep pace with him when he was ablaze with enthusiasm about a new project.  It was then that all her resourcefulness, all her patience was most keenly valued by her family and friends.

I am astounded by the amount of research Dr. Cooper has done in writing her joint biography of married couple William and Jane Morris.  A chronological look into the beginning of a boy's life named William Morris, the sibling patterns, his wanting to be a priest, his education at Oxford which introduced him to a lifelong friendship with a young painter named Edward Burne-Jones, which introduced him to a bit of a known painter Dante Gabriel Rossetti. These two men would lead William to meet a very young, very tall, strange beauty of a girl named Jane Burden...the rest is history!  Not quite...Young William was content enough to live a quiet country life with his books on medieval history and nordic folklore surrounded by beautiful gardens until this goddess stepped into his world. His focus and direction took on new meaning while trying to get to know Jane Burden.
We owe a huge debt to the research Dr. Cooper has done on Jane Morris (nee Burden). She has traced her life from childhood to adulthood while finding a few treasures along the way.  The veil has been lifted on the little girl growing up with siblings in small living quarters in the poverty section in and around Oxford to becoming the muse for a group of well educated painters and poets.
William and Jane, The Morrises, were never a simple couple to understand. However, in trying to discern each individually, How We Might Live opens up a 'pandora's box' of lifelong hidden treasures both otherworldly and divine.  The utter brilliance of How We Might Live is how respectfully Dr. Cooper covers the relationship Jane Morris had with her husband's friend, Dante Gabriel Rossetti and the cost it would have on her reputation later in life. I was surprised by a few dinner behaviours of Rossetti toward Jane but I will leave it at that. I loved how Suzanne Fagence Cooper made connections between Rossetti's drawings/sketches of Jane and his insulting and mean hearted doodles of his friend William relating to the progression of his affair. My heart was full of sadness for William.  This is just a taste of what readers I am sure want to know.  Also, another wonderful surprise was reading one theory that it was Sarah Prinsep who taught Jane Morris how to become a lady by educating her on how to entertain and be a supporting wife. Jane apparently lived at Little Holland House with Sarah, her husband and a menagerie of painters and poets.  I hope this is true!
I was fascinated by the relationship between William Morris and the Arts and Crafts Movement when it came to the business side of how fabrics and wallpapers were made.  He was a creative genius of a man who lectured and traveled quite a lot. However, as the marriage progressed, Jane would give birth to two daughters Jenny and May Morris. Jane was an absolute doting mother who would do anything for her girls. William was the soft, mushy, sweet funny storytelling and playing with the girls dad that one would expect.
At the end of the day, How We Might Live shows how a marriage works and survives throughout affairs, illness, fighting, business profit loss, etc.  To cope with Jane's affair, William believing he could not give Jane what she needed, chose to travel to Iceland, getting away to think things over. In the end, as William aged and his health grew poorer, they came together as a stronger couple who talked things out privately. When William Morris passed away, it was Jane Morris who continued to keep the business running along with her grown daughter May Morris who would eventually take over after Jane's passing.
Swirling around The Morrises were many favorites of The Pre-Raphaelite Circle:  Lizzie Siddal is discussed throughout How We Might Live in association with her relationship and marriage to Dante Gabriel Rossetti. Also mentioned was Lizzie's childhood friend, Emma Madox Brown who according to her diary was, E.D. Emma Drunk, wife of Ford Madox Brown. John Ruskin makes a few appearances as a friend of William Morris in his love of Medieval and Gothic.  Red Lion Mary is introduced as helping the painters out during their times when paintings were not selling. Fanny Cornforth is mentioned once in passing. Mostly, it is Edward Burne-Jones, wife Georgie, kids, Philip and Margaret as supporting cast.
I am humbly grateful to have been sent an early digital review copy from Ana and Elizabeth of Quercus Books and River Run Books.
You can purchase the hardback, quercusbooks
How We Might LIve Jane Morris Preraphaelite Suzanne Fagence Cooper William Morris