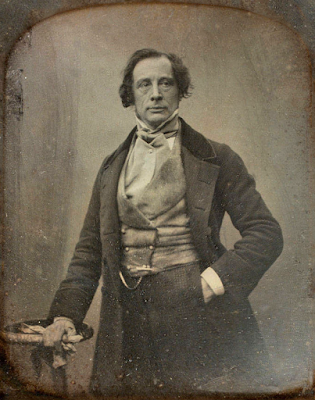 Daguerrotype of Charles Dickens by Antoine Claudet, 1852
The Christmas of 1812 was celebrated by John and Elizabeth Dickens (nee Barrow) in the town of Portsmouth on the south coast of England. Frances (known as Fanny) was two years old and Charles was 10 months old. Their father, John, worked as a clerk in the Navy's Payroll Office. John was known to be terrible with finances. Because of this, they often had to move house. By Charles' second birthday, Monday, 7 February 1814, the Dickens family lived in Kent for several years.
As a young boy, Charles could always be found in a small room, sitting and reading through his father's book collection. According to Charles Dickens unfinished autobiography,

My father left a small collection of books in a little room upstairs to which I have access and which nobody else in our house ever troubled. From that blessed little room, Roderick Random, Peregrine Pickle, Humphrey Clinker, Tom Jones, The Vicar of Wakefield, Don Quixote, Gil Blas, and Robinson Crusoe, came out a glorious host, to keep me company. They kept alive my fancy, and my hope of something beyond that place and time - they, and the Arabian Nights and the Tales of the Geni- and did me no harm; for, whatever harm was in some of them, was not there for me; I knew nothing of it.  It is astonishing to me now, how I found time, in midst of my porings and blunderings over heavier times, to read those books as I did. It is curious to me how I could ever have consoled myself under my small troubles (which were great troubles to me), by impersonating my favourite characters in them... I have been Tom Jones (a child's Tom Jones, a harmless creature) for a week together. I have sustained my own idea of Roderick Random for a month at a stretch, I verily believe. I had a greedy relish for a few volumes of voyages and travels-I forget what, now - that were on those shelves; and for days and days I can remember to have gone about my region of our house, armed with the centre-piece out of an old set of boottrees:  the perfect realisation of Captain Somebody, of the Royal British Navy, in danger of being beset by savages, and resolved to sell his life at a great price... When I think of it, the picture always rises in mind of  a summer evening, the boys at play in the churchyard, and I sitting on my bed reading as if for life. Every barn in the neighbourhood, every stone in the church, and every foot of the churchyard, had some association of its own, in my mind, connected with these books, and stood for some locality made famous in them. I have seen Tom Pipes go climbing up the church steeple; I have watched Strap, with the knapsack on his back, stopping to rest himself upon the wicket-gate; and I know that Commodore Trunnion held that club with Mr. Pickle in the parlour of our little village house.

Celebrating Christmas during the time of Charles Dickens, would have consisted of decorating the house with ivy, playing games, singing, dancing, eating special Christmas foods and giving gifts only when and if the family could afford it. When Charles was a little boy, Christmas trees were not really known in Britain outside of the  royal court. Therefore, the Dickens family would not have had a Christmas tree and they would not have expected a visit form Father Christmas. Father Christmas was little known in Britain until the Victorian era. Although, Father Christmas could be seen in a traditional mummers' folk dancing he was not the figure that grew out of the legend of St. Nicholas or Santa Claus. Although, in America a popular poem published in 1822, when Charles would have been ten years old, called, Twas the Night Before Christmas, was not popular in Britain until the second half of the nineteenth century.
In the Dickens household, when Charles was a little boy, the season of Christmas started on Christmas Eve (24 December) until Twelfth Night (6 January). Charles Dickens wrote his first Christmas story, Christmas Festivities, in 1835, where the grandfather tells his grandchildren that he kissed their grandmother under the mistletoe when he was still a boy. Dickens included a mistletoe scene in The Pickwick Papers (1837): 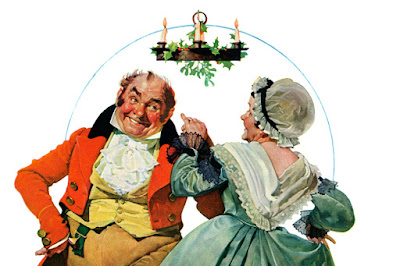 They all three repaired to the large kitchen, in which the family were by this time assembled, according to annual custom on Christmas Eve... From the centre of the ceiling of this kitchen, old Wardle had just suspended, with his own hands, a huge branch of mistletoe, and this same branch of mistletoe instantaneously gave rise to a scene of general and most delightful struggling and confusion; in the midst of which, Mr. Pickwick, with a gallantry that would have done honour to a descendant of lady Tollimglower herself, took the old lady by the hand, led her beneath the mystic branch, and saluted her in all courtesy and decorum.

In the December 1850 issue of Charles Dickens's magazine, Household Words, in the article, A Christmas Tree, he shares a memory he had of how his Christmas toys were frightening and confusing: 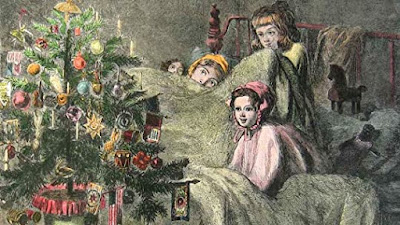 I look into my youngest Christmas recollections! All toys at first, I find. Up yonder, among the green holly and red berries, is the Tumbler with his hands in his pockets, who wouldn't lie down, but whenever he was put upon the floor, persisted in rolling his fat body about, until he rolled himself still, and brought those lobster eyes of his to bear upon me-when I affected to laugh very much, but in my heart of hearts was extremely doubtful of him. Close beside him is that infernal snuff-box, out of which there sprang a demoniacal Counsellor in a black gown, with an obnoxious head of hair, and a red cloth mouth, wide open, who was not to be endured on any terms, but could not be put away either...The cardboard lady in a blue-silk skirt, who was stood up against the candlestick to dance, and whom I see on the same branch, was milder, and was beautiful; but I can't say as much for the larger cardboard man, who used to be hung against the wall and pulled by a string; there was a sinister expression in that nose of his; and when he got his legs round his neck, he was ghastly, and not a creature to be alone with.
When did that dreadful Mask first look at me? Who put it on, and why was I so frightened that the sight of it is an era in my life?... Nothing reconciled me to it... Nor was it any satisfaction to be shown the Mask, and see that it was made of paper, or to have it locked up and be assured that no one wore it. The mere recollection of that fixed face, the mere knowledge of its existence anywhere, was sufficient to awake me in the night all perspiration and horror, with, "O I know it's come! O the mask!".

Just a few Dickens Christmas excerpts from his books and newspaper journal.
I hope you all have had a relaxing Christmas, given the circumstances our world is in at the moment.
Thank you all for your support and interest in my passion for the personal lives of nineteenth century and Victorian era writers, artists, and authors.
- December 25, 2020