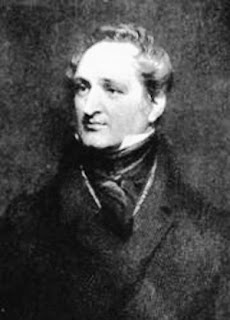 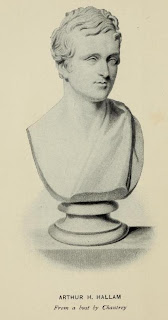 On September 15, 1833 Arthur Henry Hallam died suddenly at the age of twenty-two, while on a trip to Vienna. Although a promising poet and essayist, Hallam is chiefly remembered as the one eulogized in Tennyson's In Memoriam. The two first met at Cambridge, where they became members of the club, the "Apostles," and best friends. For sixteen years, after Hallam's death, Tennyson wrote his series of poems; though connected as stages of evolving grief. 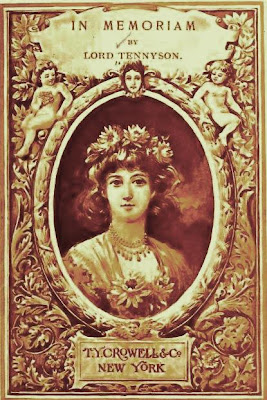 On June 1, 1850 Moxon published a volume-length poem entitled In Memoriam AHH Obit MDCCCXXXIII.  Praise for the work was immediate, widespread, fervent, and lasting.  Tennyson was truly the major poet of his time. A few months later, when The Prelude was published following Wordsworth’s death in April, In Memoriam went through five editions and roughly 25,000 copies in a year and a half. After Prince Albert’s death in 1861, Queen Victoria confided to Tennyson, “Next to the Bible, my comfort is In Memoriam.”

In Memoriam is a series of 129 short poems of varying length, all composed in the same form. The lyrics may be read individually, rather like the entries in a journal, but the poem has an overall organization. It moves from grief through acceptance to joy. The poem combines private feeling with  confusion over the future of Christianity, which was a feeling many Victorians shared.

In Memoriam is often called one of the three great English elegies, joining Milton’s Lycidas and Shelley’s Adonais.  Tennyson says of In Memoriam, “it is a kind of Divina Commedia" spoken by "the voice of the human race" and expressing "my conviction that fear, doubt and suffering will find answer and relief only through Faith in a God of Love." Or as the poem's concluding lines express it, "One God, one law, one element, / And one far-off divine event / To which the whole creation moves."
For Tennyson, the poem was also about love won. Within two weeks of publication, he and Emily Sellwood married, she and her family now having overcome their own doubts about Tennyson's religious faith. On their honeymoon they visited Arthur Hallam's grave, "a kind of consecration" of their vows; in time they would name their first son "Hallam," and Tennyson would conclude that "The peace of God entered into my life when I married her."

Two of my favorite stanzas from In Memoriam featured below. I only hope after I am gone, my friends remember me with such deep abiding love. 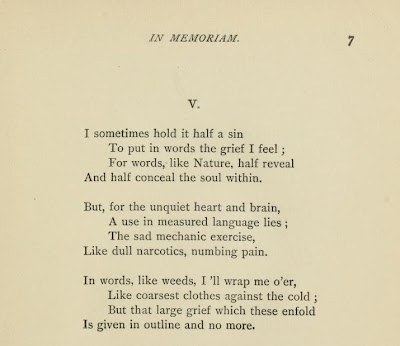 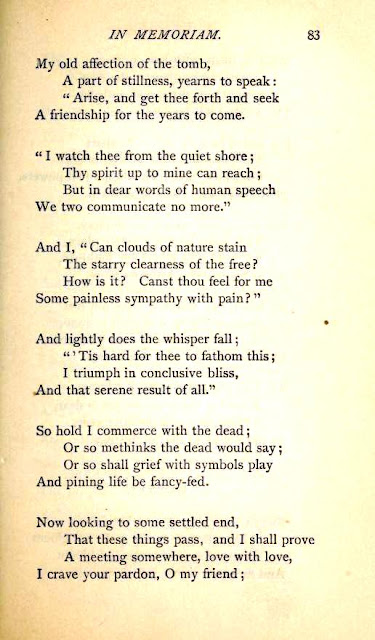 Gary said…
In Memoriam one of Tennyson's best poems and tribute to a dearly departed friend. Thank you for a great publication post.
June 1, 2012 at 2:39 PM

Veronica said…
Alfred Lord Tennyson's In Memoriam is my go to read whenever I miss my friend who has passed away. Very nice tribute!
June 1, 2012 at 7:41 PM

Kimberly Eve said…
Hi Gary and Veronica, thank you both for commenting. I appreciate it. I'm glad you enjoyed my Tennyson post.
June 1, 2012 at 8:36 PM

Lit~Lass said…
This is a wonderful post and is making me long to wrap myself in In Memoriam. The tension between Tennyson's measured language and his haunting feeling of being "an infant crying in the night... and with no language but a cry..." is one of the most painful and evocative expressions of grief ever written.

May I ask what your sources were for this post? I'm very interested in Tennyson's struggles with Christianity and doubt and if there are some books that gave you your knowledge, I'd love to read them. Thanks.
June 2, 2012 at 1:20 AM

Kimberly Eve said…
Hi Lit~Lass, thanks so much for your wonderful thoughts. There will always be something innately unique and special about Alfred Lord Tennyson the person and his works.
For sources, one that was especially helpful and new is, 'A Life Lived Quickly: Tennyson's Friend Arthur Hallam and His Legend' by Martin Blocksidge. It can be found on Amazon. I highly recommend it though it is pricey! Here's the link,
http://www.amazon.com/Life-Lived-Quickly-Tennysons-Friend/dp/1845194187/ref=sr_1_1?ie=UTF8&qid=1338647242&sr=8-1
June 2, 2012 at 10:31 AM