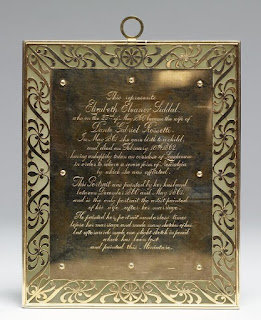 This delicate, palm-sized portrait sits encased in a jeweled frame made of gold, bowenite, opal, diamonds, and star sapphires. The object was given to The Walters Art Museum in 1963 with a large collection of portrait miniatures. Unlike a traditional painted miniature, this piece is a black and white photograph—likely a carte-de-visite—overpainted in gouache. The first photograph of the object included in our gallery shows the front of the framed photograph. A three-quarter length portrait of a figure sits before a dark blue background, head turned slightly to the left, with her eyes downcast and her hands clasped. A light red shawl is draped around her shoulders and held in place with her hands, partially obscuring a brown striped dress. White accents draw our eyes to her sleeves and the frill at her neck, where a brooch is fastened. In the second image, the engraved inscription on the reverse of the frame, added in the early 20th century, asserts:This represents / Elizabeth Eleanor Siddal, / who on the 25th of May 1860 became the wife of / Dante Gabriel Rossetti. / In May 1861 she gave birth to a child, / and died on February 10th 1862, / having unhappily taken an overdose of Laudanum / in order to relieve a severe form of Neuralgia / by which she was afflicted. / This Portrait was painted by her husband / between December 1860 and May 1861, / and is the only portrait the artist painted / of his wife after her marriage. / He painted her portrait numberless times / before her marriage and made many sketches of her / but afterwards made one slight sketch in pencil / which has been lost / and painted this miniature.
JO BRIGGS ON WHAT THIS OBJECT TEACHES US:If we choose to accept the inscription on the back of the frame at face value, this portrait remains the only locatable photograph of Elizabeth Siddall. For Dr. Briggs, the photograph’s physical history, as well as its literal “framing,” prompts valuable questions about Siddall’s agency and our role as viewers in the portrait’s ongoing history.Dr. Briggs explains that the portrait appears to date from around 1860, based on the format of the photograph and the style of the sitter’s dress. However, no written evidence links the photograph or the overpainting to either Siddall or Rossetti. The earliest reference Dr. Briggs has found to the photograph’s existence dates to 1906, when it entered the collection of the American banker J. Pierpont Morgan. It was Morgan, working with his personal curator of portrait miniatures, George C. Williamson, who added the frame and the inscription. The inscription attempts to fix Siddall first and foremost in her traditional feminine roles of wife and mother, while also mythologizing the manner of her death and emphasizing above all her status as a tragic Pre-Raphaelite muse. Dr. Briggs suggested that the frame’s inscription may have been intended by Williamson to persuade Morgan of the portrait’s value and authenticity. The inscription may thus have more to do with the exchange between these two men than it does with Siddall herself.For Dr. Briggs, the portrait’s ambiguous history and the inscription on the back of the frame relate directly to the issue of Siddall’s agency. As feminist art historians have pointed out, Siddall was a Pre-Raphaelite artist in her own right—but it is her role as model and muse to her husband and his circle that defined and continues to define her. If this is indeed a photograph of Siddall, Dr. Briggs suggested that here, yet again, she has been effaced by Rossetti and his legacy.The issue of Siddall’s agency has led Dr. Briggs to reflect on her own curatorial role in the portrait’s ongoing history: does looking for further documentary evidence of the photograph’s provenance group her with art experts like Williamson, who attempt to exert their control over this object and Siddall’s image? Dr. Briggs urges us to consider where we can locate Siddall’s agency within the composition of the portrait, pointing out that the way the sitter crosses her hands over her chest recalls Rossetti’s painting “Beata Beatrix.” Did Siddall work with Rossetti to find this introspective stance, which both “attracts and deflects the male gaze”? Or did she perhaps decide for herself how to pose for the photograph?Ultimately, Dr. Briggs reminds us that this portrait is forever altered not only by the layer of gouache and the elaborate frame but also by the narrative that has built up around it—and each of these elements mediate our relationship to the object. (Jo Briggs, The Walters Art Museum, Baltimore, Maryland).
Elizabeth Siddall, 1860, photograveure  and autograph letter from Elizabeth Siddal to Georgiana Burne-Jones, 12 March 1861 Mark Samuels Lasner Collection, on loan to the University of Delaware Library. 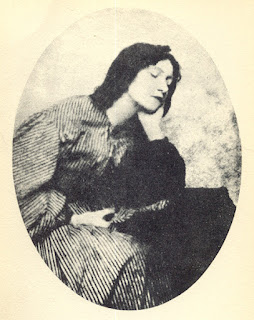 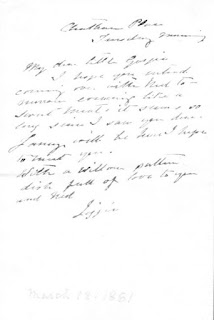 Chatham Place
Tuesday Morning
My dear Little Georgie,
I hope you intend coming over with Ned tomorrow evening like a sweet meat, it seems so long since I saw you dear.  Janey will be here I hope to meet you.
With a willow pattern dish full of love to you and Ned.
Lizzie 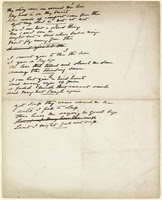 Elizabeth Eleanor Siddall, Manuscript sheet of poetry.
"Thy strong arms around me love."
Ashmolean Museum, University of Oxford
Thy strong arms are around me, loveMy head is on thy breast;Low words of comfort come from theeYet my soul has no rest.For I am but a startled thingNor can I ever beAught save a bird whose broken wingMust fly away from thee.I cannot give to thee the loveI gave so long ago,The love that turned and struck me downAmid the blinding snow.I can but give a failing heartAnd weary eyes of pain,A faded mouth that cannot smileAnd may not laugh again.Yet keep thine arms around me, love,Until I fall to sleep;Then leave me, saying no goodbyeLest I might wake, and weep.
Lovers listening to music by Elizabeth Siddall, 1854