A Review of Charlotte & Arthur by Pauline Clooney 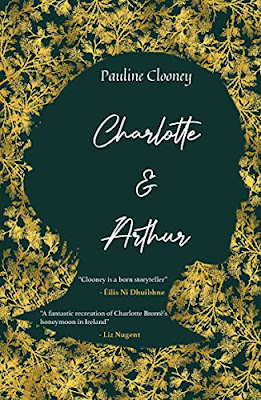 But without our human senses to give meaning to this world and all its glories, without our emotions to take pleasure in nature, without our spirituality to give praise to the divine creator, what is it all but rock and water and air,' Arthur said.

How handsome he looked to her at that moment.  She had not expected such philosophy, if he could always surprise her in this manner, saying unexpected things, unveiling a mind, that might not be a literary one, but had the potential to match hers in depth and understanding of the human condition. A sensation coursed through her, she felt an eddy from her heart redden her cheeks and had she been more expert in these matters, she might have recognised it as the thrill of physical desire. 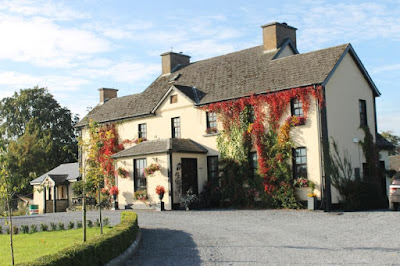 In Pauline Clooney's debut novel, I feel as if I have met Mr. and Mrs. Nicholls for the first time. Arthur Bell Nicholls was a curate at the Parsonage with Reverend Bronte in Yorkshire, England. His wife, Mrs. Nicholls was the authoress of Jane Eyre,  Charlotte Bronte. He was working with her father and eventually through trial and tribulation they fell in love.  It wasn't an easy road but in June 1854 they were married at Haworth Parish Church.

The novel, Charlotte & Arthur follow the happy couple on their honeymoon journeying from Yorkshire to Wales then throughout Ireland to meet her new in-laws, her husband's family, until returning to the  parsonage.   As the married couple traveled from place to place, it was wonderful to read the descriptions of how they were seated side by side in passenger cars looking out their window and commenting on the sights. When Charlotte grew tired, Arthur let her sleep and they were each written with a shared sense of humour that they each enjoyed. I was impressed with how the author included a few of Charlotte's letters in certain chapters as Charlotte would write to her friends sharing her experiences with 'Arthur' whom she now called instead of Mr. Nicholls and the protection she was getting used to from her husband. Gone was her preferred signature of CB replaced by Mrs. Nicholls.  I could feel her supreme happiness and am grateful she finally experienced wedded bliss.

One of my favorite chapters and one I found most touching was chapter nine where Arthur and Charlotte both describe to each other the memory of the last time they saw or remember their mothers before both women died; Charlotte being only five years old and Arthur only being twelve years old.

Charlotte, as she spoke, was thinking of her own mother. She had so few memories to draw on being just five when she died. One, which might have been some fanciful imagining was of a young woman, a prettier version of Aunt, playing with Branwell in the parsonage parlour.

My punishment, Charlotte, is an image that haunts me. It is of my mother sitting at a kitchen table, her fingers pressed to her eyes her mouth a grimace of pain. Arthur said, and as they both looked at each other, Charlotte felt a connection, like an invisible thread, pull her heart that bit closer to his.

We have both been very privileged to have women such as Aunt Harriette and Aunt Branwell in our lives, Arthur. Charlotte said, and as the movement of the boat increased, causing them both to sway from side to side, she wondered if it was the spirits of their mothers conjuring up the winds to rock their children one more time.

Charlotte & Arthur is truly a beautifully written re-imagining of their very brief time together as husband and wife.  Gone is the competitive spinster Charlotte Bronte eager to be a published author living with her equally brilliant sisters and father.  Instead, a married woman emerges discovering the powerful result of the love of a good man.

Available on kindle at  Amazon

Available direct from the publishing house in Ireland, merdog books