Who was Jane Morris? A lecture at Columbia University, NYC. 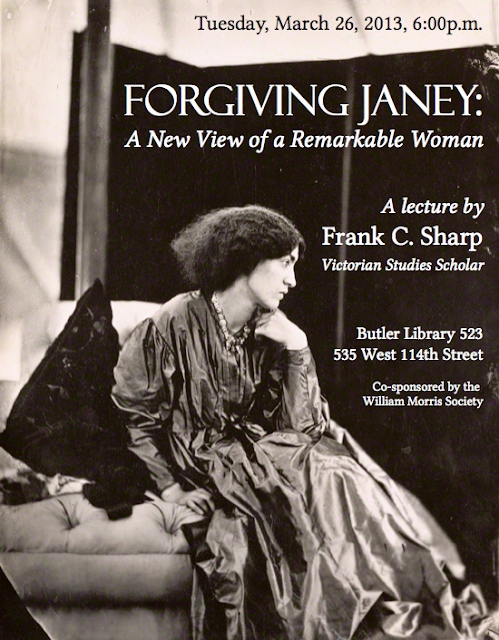 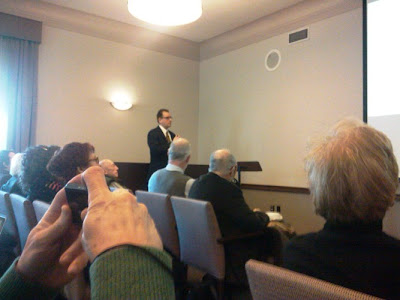 My photograph of Frank C. Sharp
Frank Sharp gave a lecture focusing on Jane Morris and the important moments in her life using excerpts of her letters from a new book he edited with Jan Marsh, ‘The Collected Letters of Jane Morris’ as well as gifting the audience with his wonderful stories of her, anecdotes from colleagues and friends of The Morris’s as well.  He really brought her to life and shed new light on how we have ‘wrongly’ perceived Jane Morris over the decades.   In addition, as Mr. Sharp spoke, he was accompanied by photographic images and paintings of Jane Morris through various stages of her life. However, only one photograph with one of her daughters was included. It was mainly Jane Morris alone, for whatever reason.

Throughout his fascinating lecture, I took notes and wanted to share just the highlighted memories or interesting bits.  I do not own a copy of ‘The Collected Letters’ as it is very expensive, so I’m winging it purely as a lover of  Pre-Raphaelite Art and someone who has studied the artists I admire in the brotherhood, purely for fun and enjoyment or to satisfy my own curiosity. Listening to Frank speak, I was wondering how Jane Morris fit into the Victorian era or did she? Was she more than just a painter’s muse? How intelligent was she? Did she have aspirations of her own or was she satisfied with being a painter’s wife? Well, Jane Morris was anything but satisfied with her lot in life. It is Frank Sharp’s belief, or so he stated in his lecture, that as a result of Jane Morris’s two affairs—one with Dante Gabriel Rossetti and one with Wilfrid Scawen Blunt, she has been branded and ‘immortalized’ as the ‘prostitute’ or someone so non sequential who doesn’t even rate as worth remembering. For instance, Frank explained how the lecture title, ‘Forgiving Janey’ occurred. He was discussing Jane Morris with someone who when her name was mentioned reacted with such disgust the person said to Frank, ‘I just can’t forgive that woman!’  Should we forgive her and what for? So, Frank began attempting to answer these questions and to dispel this negative myth of Jane Morris. He explained how editing books became such a problem for him because Jane Morris’s life was not catalogued since she was not deemed important enough for scholars and the like to ‘catalog an artist’s girlfriend’ which is exactly what one library cataloguer told Mr. Sharp while he was gathering his research. How do you trace a woman who he thought of as an important woman when the so called experts whose job it is don’t agree?

The next question Frank asked was why is Jane Morris significant? His answer, he believes because ‘she recreated her identity after meeting William Morris’.  William Morris must have provided her with special tutors to better her education since it was after Jane met Morris she learned and became fluent in French and Italian. Jane would also alter her speech depending upon who she met and was engaging in conversation with throughout her life with William Morris. Jane was extremely well read; her letters tell us that she read Goethe and was a favorite of hers in addition to others such as Tennyson and Shakespeare.

Between the years 1865-1885 Jane was in charge of Morris & Co, the Morris Decorating Firm. Jane became an expert in embroidery including embroidering a set of curtains with floral designs. She contributed to a series of panels depicting famous women.
Jane taught her daughter May to embroider. Jane even critiqued May’s entry to one of William Morris’s books. Frank Sharp read an excerpt from a letter Jane wrote to May in 1899 that’s in the collected letters book but I couldn’t write down the entire excerpt of the letter, though.

In 1882 Jane became involved with the Icelandic Relief Fund. She also campaigned to help St. Mark’s Basilica in Venice, Italy. She handled the business with their home Kelmscott after the death of William Morris, including involvement in the printing press. Here, Frank reads an excerpt from Jane’s letter to Blunt, sorry couldn’t catch it.

Discussing Jane’s influence on Dante Gabriel Rossetti, Frank remarked on how Jane urged Rossetti to exhibit his paintings at the Grovesnor Gallery since ‘Ned’ or Edward Burne-Jones had already done so but Rossetti never took Jane’s advice and passed on exhibiting  at the Grosvenor.

Also, Frank mentions how Jane last modeled for Rossetti in 1881 and in a previously unknown letter in 1882 Jane received news of Rossetti’s death owing to chloral, Jane says, ‘I gave up on him’.

Frank again emphasizes the purpose behind this new edition of ‘The Collected Letters’ book with Jan Marsh which includes previously unknown letters, totaling 570, is because Rossetti and Blunt’s letters depict Jane is such a negative light. They are hoping to make people aware of what an intelligent and genuine woman Jane Morris was.

Frank covers the brotherly friendship between William Morris and Crom Price who was a student of Rudyard Kipling. Frank reads excerpts from Jane’s letters to Crom Price, ‘I want to try to be respectable or I’ll be a pauper instead.’ And how she tells Price, ‘I have a new disease socialism on the brain.’  Jane Morris had a wonderful sense of humor.  Jane Morris has a keen interest in politics but not William Morris’s idea of socialism. She had her own opinions on Socialism that were separate from her husband’s and she liked it that way whether or not Morris agreed with her was another topic altogether!

Frank discusses the idea or belief that Jane and William Morris had a broken marriage but says this is misplaced, especially if you take a look at the way Jane supported practically every facet of his career even honoring his memory after he died.

Jane Morris takes more than in interest in the suffrage movement even making her first friend as a result with Jane Cobden (?). Frank reads an excerpt from Jane Morris’s letter to Jane Cobden and this sentence struck me, “I want both sexes to have equal rights where women are better educated.”  Also the name of Millicent Fawcett was mentioned as a friend of Jane Morris during this time.
Friends of Jane Morris during her later years include George and Rosalind Howard, the Countess of Carlyle, who resided at Castle Howard.  A portrait of her can be found on the Rossetti  Archive.

One side note:  Frank Sharp mentioned that during  Jane Morris’s time with Wilifred Blunt she designed the cover to his 1889 edition of In Vinculus and it was a creamy white cover with a shamrock. It is housed at the British Library. I looked for it online but couldn’t find it. 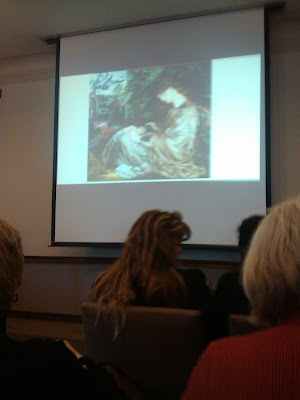 Laura Morrigan said…
This sounds like an amazing talk! I wish I could have seen it! I immediately looked up the book, at $145 it sure is a dream of the far future owning it! I will have to look for other cheaper sources for the moment! I am very interested in women like her that are often only portrayed as the lover! I recently had interest sparked in Lady Caroline Lamb, who apparently wrote great parodies of her one time lover Byron's work, I plan to look more into her.
March 27, 2013 at 10:41 PM

Kimberly Eve said…
Hi Laura, I'm so glad you enjoyed the read! I wish I could afford the book but if I ever find it available for under one hundred dollars, I'll grab it! Good luck finding your copy. Yes, I agree, it is an interesting angle, the woman portrayed as the lover, especially once you put it in to context. Lady Caroline Lamb and Lord Byron, now there's a story! Thanks so much for stopping by, reading my post and taking time to leave a comment. Oh, and thanks for following!
March 28, 2013 at 10:36 AM

Hermes said…
Thank you so much Kimberly wish I had been there too. I have the book. I disagree with a lot of his comments but it would take too long to explain. I love Jane and admire her in many ways but she married the wrong man and in many ways her star has eclipsed May who was so gifted. But so many thanks for the fascinating notes. There is a new academic book on Jane due out soon.
March 28, 2013 at 10:42 AM

Kimberly Eve said…
Hi Hermes, I really wish Jan Marsh was able to attend, it would have been even better to have both their views. I'm sure you're not the only one to disagree with his views but I have to admire his passion! May nor Jenny were really brought up only when covering Jane's embroidery but then only briefly. I'm glad I asked him my question about them, it gave me a bit more perspective on how he felt about Jane on an even more personal level and I was curious of his thoughts. Yes, I came across the new book, I'll have to look out for it. My focus on Jane Morris would only be within a familial context, so Jan Marsh's book on Jane and May was all I need so far! Thanks so much for commenting.
March 28, 2013 at 11:01 AM

Margje Bijl said…
Hi Kimberly, Thanks for the summary of the lecture. I went to the lecture in the William Morris Gallery, where Jan Marsh also spoke. It was a pleasure to meet them and to hear more background details about the book.I am verry happy with the book as it does indeed offer a new insight in Jane's personality, it puts all the other bits and pieces in perspective. My only regret is that they didn't include Jane's handwriting (you can see it on my website though!).

Anyway, good news, I am also working on a book about Jane Morris... an artists’ book: 'Jane Morris' life story, seen through the eyes of her contemporary double'. The booklet will be available at the William Morris Gallery, in 2014, for an affordable price.

The travel story consists of fragments of my dreams of Jane and William Morris, Rossetti, their homes and their cultural heritage. Practical travel information is also included to enable those interested to visit the spots that played such an an important part in Jane's life.

Kimberly Eve said…
Hi Margje, I know of your work as an artist affiliated with Jane Morris's painting's, etc., thanks so much for finding my page and commenting. I wish you all the best with your book about Jane Morris.
March 29, 2013 at 3:53 PM

Anonymous said…
I also attended this lecture and found Frank Sharp's lecture to be quite captivating. He clearly has the depth of knowledge that allowed him true insight into the characters surrounding Jane's life and collecting her letters from all over must have been quite detective story. His lack of judgment on all of the characters and obvious love for their movement underscored his passionate remarks- a truly enjoyable evening!! Thanks Kimberly for publishing it for others!
April 8, 2013 at 10:17 PM