A Review of The Somnambulist by Essie Fox 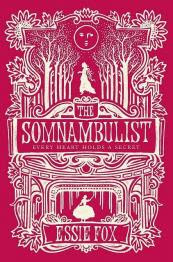 Some secrets are better left buried...'
When seventeen-year old Phoebe Turner visits Wilton's Music Hall to watch her Aunt Cissy performing on stage, she risks the wrath of her mother Maud who marches with the Hallelujah Army, campaigning for all London theatres to close. While there, Phoebe is drawn to a stranger, the enigmatic Nathaniel Samuels who heralds dramatic changes in the lives of all three women. When offered the position of companion to Nathaniel's reclusive wife, Phoebe leaves her life in London's East End for Dinwood Court in Herefordshire - a house that may well be haunted and which holds the darkest of truths. In a gloriously gothic debut, Essie Fox weaves a spellbinding tale of guilt and deception, regret and lost love.
Every heart holds a secret... 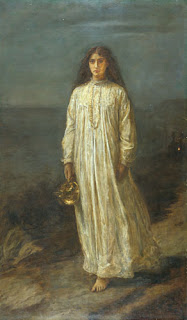 The Somnambulist by John Everett Millais, 1871
Millais’ painting was thought by some to be based on Wilkie Collins’ novel, The Woman in White, but others presumed it was inspired by Bellini’s opera, La Sonnambula.

'The Somnambulist' has to do with sleepwalking. The subject of sleepwalking fascinated the Victorians and relates to their preoccupation with the occult. The Victorians became fascinated by contact with “the other world” through clairvoyance, séances, ghosts, poltergeists and with the phenomenon of sleepwalking. Here the woman is walking very close to the edge of a cliff and we as viewers are uncertain as to whether she may fall and possibly die, or whether she will keep to the path.

The subject matter of this beautiful Millais painting is crucial to Essie Fox's Victorian gothic mystery debut novel. 'The Somnambulist' is beautifully written broken into three parts as you would find in a play or maybe an opera...Yes, aspects of George Frideric Handel's operetta, 'Acis and Galatea' are weaved throughout 'The Somnambulist' with its themes of unrequited love, murder and betrayal! Especially, its chapter headings taken from the opera's libretto.

Add to this London 1881 setting, a sheltered seventeen year old main character Phoebe Turner who is painfully overshadowed by her religious mother Maud and her beautiful Aunt Cissy who sings on the stage of Wilton's Music Hall. A wonderful aspect of Victorian culture.

Two subplots concerning a mysterious dark, handsome older man who seems to not be such a stranger to Aunt Cissy or young Phoebe for that matter... a large mansion in Hertfordshire, family intrigue, ghostly happenings, lots of deaths and of course a laudanum addict...Come on it's the Victorian Era!

I don't want to reveal everything or go into much detail because it would ruin the fun for you!
I will say however, I was never disappointed reading 'The Somnambulist'. I enjoyed every minute of it and I took my time reading it because that rare feeling came upon me...
you know the one...it creeps up on you the longer you read chapters, get to know characters and settings seem familiar to you...you're not sure why, all you know is you have to keep reading to find out what the secrets are...you ask yourself questions and you must keep reading so you can discover if you are right or wrong...Let's just say I didn't always see the twists and turns that occurred but how I love any opportunity to return to Victorian, England.

A beautiful poem was featured in a chapter and I think it fitting to close with it. When you read 'The Somnambulist' you'll understand why I chose it...


To One in Paradise by Edgar Allan Poe

Thou wast that all to me, love,
For which my soul did pine—
A green isle in the sea, love,
A fountain and a shrine,
All wreathed with fairy fruits and flowers,
And all the flowers were mine.

Ah, dream too bright to last!
Ah, starry Hope! that didst arise
But to be overcast!
A voice from out the Future cries,
“On! on!”—but o’er the Past
(Dim gulf!) my spirit hovering lies
Mute, motionless, aghast!

For, alas! alas! with me
The light of Life is o’er!
No more—no more—no more—
(Such language holds the solemn sea
To the sands upon the shore)
Shall bloom the thunder-blasted tree,
Or the stricken eagle soar!

And all my days are trances,
And all my nightly dreams
Are where thy grey eye glances,
And where thy footstep gleams—
In what ethereal dances,
By what eternal streams.

Essie Fox said…
Thank you so much Kimberly. It really does mean such a lot to know when a book has been enjoyed and understood.

Robert Stephen Parry said…
Looks interesting, this one. And Edgar Allan Poe was a fine poet, wasn't he!
Thanks for your review.
September 25, 2011 at 5:45 AM

Kimberly Eve said…
Thank you so much Essie for taking the time to read and leave such lovely words. I look forward to your next novel!

Yes, Robert this one is very interesting! Edgar Allan Poe was one of the best!

Kirsty Stonell Walker said…
Yes, this has definitely got to go on my Good Reads list :) Marvellous review of what promises to be a fabulous book, with such a beautiful cover. I also love Poe's poems, such darkness !
September 26, 2011 at 1:13 PM

Kimberly Eve said…
Thanks gigigirl and Kirsty for taking the time to read and comment on my review. Poe's poem is truly beautiful isn't it!
September 26, 2011 at 1:30 PM

Anonymous said…
What a great review! I definitely have to buy this book. Off to put it in my wishlist before I forget. I need to link to her blog. I've seen it once. THANKS.
September 26, 2011 at 5:50 PM

Kimberly Eve said…
Hi Melinda,
Welcome and thanks so much for commenting and leaving such words of loveliness!
I would love to know your thoughts on The Somnambulist. Especially, a review of your own!
Essie Fox's blog is called The Virtual Victorian, her link is on my favorite blog list found in the left hand column or her comment above.
Also, her main website is www.essiefox.com with blog link found there also!
September 26, 2011 at 6:47 PM

Anonymous said…
As soon as I read it I am going to post a review. I found it and read part of the book. It's a haunting storyline.

Kimberly Eve said…
Melinda, I can't wait to read your review and your perspective on 'The Somnambulist'. It has become a favorite story! Happy Reading and posting out there in blogland :)
October 15, 2011 at 9:31 AM